Carlo Manley was one of many successful recipients of the NAFEA Student Scholarship Program in 2018. Carlo is featured in this University of Melbourne article about his Yirrkala Homelands School placement in East Arnhem Land supported via the NAFEA program.

Curtin University’s Cheryl Hough was announced as the recipient of the 2017 National Association of Field Experience Administrators Outstanding Award (NAFEA) at the annual conference in Adelaide on 14 July 2017.

Cheryl Hough has been in the Field Experience area since 1982. She leads a School Placement team whose work is integral to the functioning and the reputation of the School of Education and Curtin University. Well done, Cheryl! Well deserved. 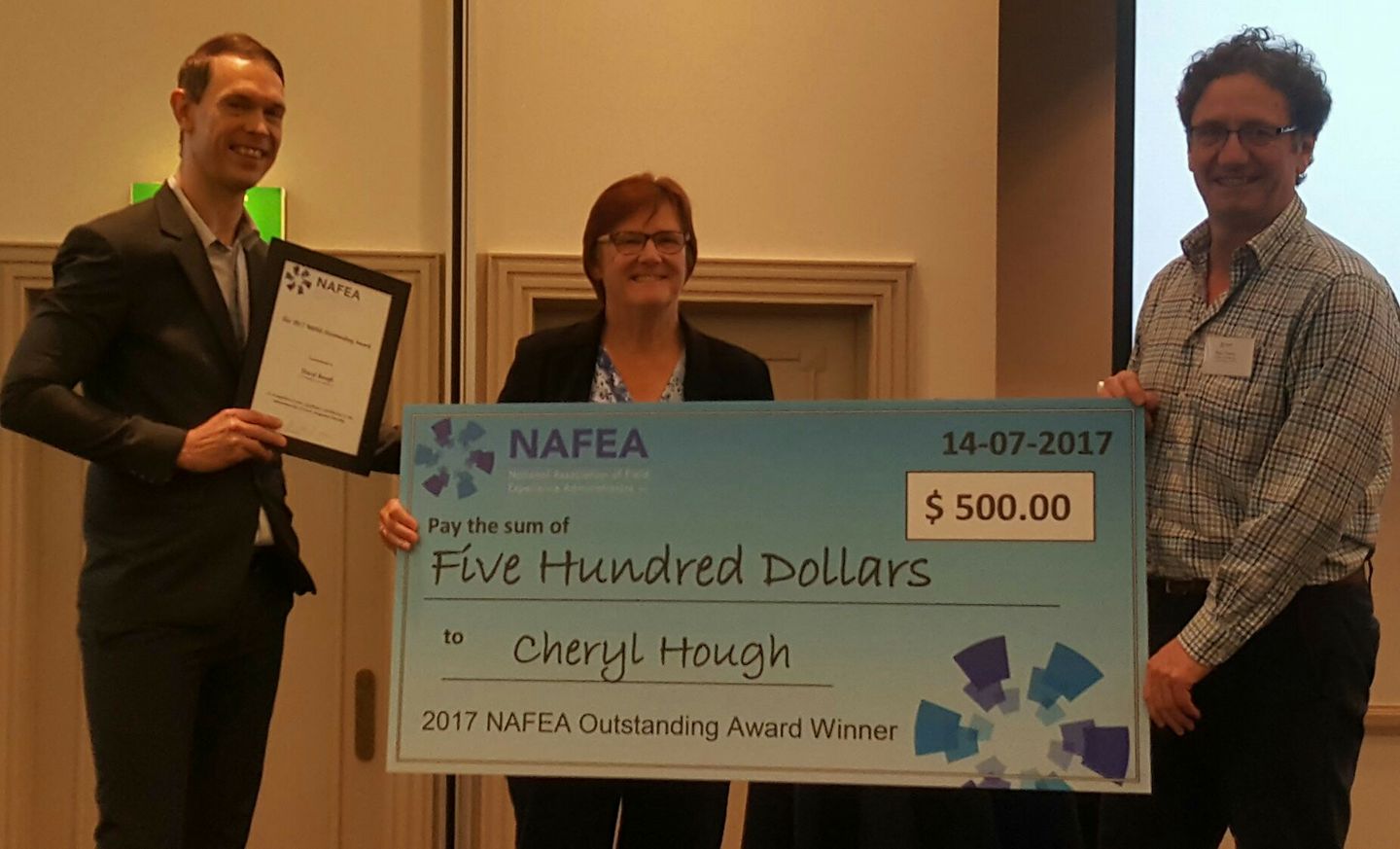 Members are encouraged to facilitate a break out session or share their practices with other members at a workshop. Please submit 100-150 words (and include a title for your presentation) to president@nafea.edu.au by 28 February 2017. The presentation should relate to the theme of the conference. Presentations will be 30 minutes in duration (including questions).

Break-out session abstracts should include an overview of the topic and some of the questions you would like to explore as part of the session. Break-out sessions will be one hour in duration.

Workshops will explore and discuss topics of interest, including sharing best practice etc. If you are interested in facilitating a workshop, please contact the NAFEA President by 28 February 2017. The workshops will be followed by the conference welcome drinks.

Presentations and break-out sessions will be scheduled for 13-14 July, with the conference dinner being held on the evening of the 13 July and the conference closing at lunchtime 14 July 2017.

Researchers Associate Professor Dean Cooley (Federation University), Dr Scott Pederson (University of Tasmania), Ms. Anita Wheeldon (University of Southern Queensland) and NAFEA President Dr Ricky Tunny (QUT) have commenced a study on the wellness of WIL administrators. Members will soon receive an email from the researchers inviting them to participate in the study. NAFEA would encourage all our members to get involved. Working in the WIL / field experience space is challenging and often stressful. This study aims to track WIL administrators’ perceptions of health and wellbeing over the course of 2017-18.

Government needs to rethink ‘caps off’ for education faculties

With pre-service teachers unable to graduate without the practicum and placements hard to find, legal action against higher education institutions is a risk, an education union warns. Serious concerns about the ability of universities to secure placements for pre-service teachers have been raised by the Productivity Commission’s inquiry into the schools workforce, with faculty staff calling for a rethink of government plans to uncap the number of university places. Early submissions from university administrators, education departments and teachers’ unions indicate the issue will be a central one for the inquiry.

The National Association of Field Experience Administrators said it was becoming harder and harder to find enough supervising teachers to mentor pre-service teachers during their placement at schools. In its submission, the association’s Victorian branch, which concentrates solely on the education sector, showed that state’s universities were unable to find placements for 224 of their pre-service teachers in the scheduled timeframe in 2010 – up from 188 in 2009.

This has led to an increase in stress for both the pre-service teachers and for staff responsible for the placements. Pre-service teachers know they are unable to graduate without the practicum and yet universities rely on a sector outside their control to provide it, the submission said.

With the increase in the potential risk of pre-service teachers being unable to complete their study by the expected date, “there is a risk of legal action being taken by a pre-service teacher against the higher education institution concerned”, the submission warned.

The number of rejections for placements experienced by all Victorian higher education providers over the past two years has increased, resulting in a corresponding rise in subsequent requests to schools. The association said secondary postgraduate pre-service teachers were the most difficult to place; during semester one in 2010 more than 10,000 requests were sent out to place 800 pre-service teachers. This equated to more than 12 requests for each student.

The association recommended that the supervision of pre-service teachers be linked to teachers’ performance review and to their professional development. It suggested bonuses be paid, and a review of the award rate carried out. Importantly, it also called for limits on the number of initial student enrolments and quotas on subject offerings where there is an oversupply.

Similarly, the NSW Department of Education told the inquiry that the need to better align the supply of new teachers from universities with the needs of schools was a “particularly acute issue”. At present, teacher supply is “dramatically mismatched” to the needs of the schools workforce. There is an oversupply of primary teachers and an undersupply in secondary subjects such as maths and science, the department’s submission said.

“An oversupply of university teaching places dilutes the quality of those seeking to enter education courses,” it said. This also placed pressure on what was an “already overstretched system” of providing placements for pre-service teachers. Therefore, the need to better align workforce supply with demand was “particularly acute” in the context of the removal of the cap on funded higher education enrolments from 2012, the submission said.

NSW appoints 2000 new teachers a year in government schools but the waiting list for permanent employment was approximately 33,000, while 5500 people completed teacher education courses at NSW universities each year, the department said. “Any uncontrolled growth in teacher education candidates, particularly in teaching areas of oversupply, will place significant strain on the relationships between higher education institutions and schools/teacher employers with respect to providing quality professional experience placements,” it said.

It cited previous estimates that showed one in four practising teachers would need to supervise a student on placement and “a growth in the number of students in training, which exceeds growth in the teaching workforce, will increase this burden”. With the volume of students undertaking teacher education courses, concerns have grown about the literacy and numeracy skills of entrants into teaching. The ATAR entry requirements for primary teaching courses at different NSW universities “can range widely”, the department said.

This was concerning and would be exacerbated when student places were uncapped, it said. The Independent Education Union similarly said the number of entrants into education courses needed to be addressed, as “in many cases the numbers far exceed the need, especially in specific fields”. The effect has been to “stretch too thinly the resources of the universities to meet the needs of their students, particularly in the area of the practicum”, it said in its submission.

The union suggested specific funding for universities that would be “embargoed for the use of practicum placements” and it should be a realistic amount to cover the cost of paying for the release time for a supervising teacher. “Finding practicum placements for thousands of education students who will never enter the profession is wasteful of supervising teachers’ time and the resources of universities,” it added.

Quality practicum experience was necessary for pre-service teachers and “to facilitate this appropriate resourcing must be provided”. Time for supervising teachers to spend with pre-service teachers was essential and “probably more important than improving the remuneration they receive for undertaking this task”.

“However, the remuneration has not been increased for years and years (in Queensland at least) and is frankly not worth the effort that is necessary to put into the task of caring for a student teacher,” the submission said.

Work Integrated Learning (WIL) is about integrating theory with practical work experience in education. While WIL is well established in many areas, like health and teaching, it is under-used in many emerging industries – where jobs and future demand may be greatest.

Thousands of employers already partner with universities to provide students with WIL experiences, but until now there has never been an overarching national strategy to guide its future growth.

“The strategy provides the opportunity for industry to play a practical role in giving students the skills and experience they need to match employer expectations,” Ms Robinson said.

“These invaluable ‘hands-on’ experiences help put a student’s education in context and make a real difference to the skills and capacity they can bring to the workplace.

“Through the implementation of this strategy we can expect more places for students in industry, better prepared graduates and a workforce that is more able to meet the growth needs of industry.

“The Strategy is a both a call for collaboration and the result of it. It is designed to strengthen the partnerships needed to lift employment, productivity and international competitiveness.

“Given the global environment, Australia must leverage our strengths, diversify, develop and compete. It’s a challenge, but an exciting one. The Strategy is both strategic and practical. It draws on a strong evidence base and the many excellent examples that already exist,” Ms Robinson said.

The value of partnerships and the National WIL Strategy are among the critical issues being discussed at the Universities Australia Higher Education Conference that begins today in Canberra.